It has been recently scientifically validated that hugging trees is good for you. Research has shown that you don’t even have to touch a tree to get better, you just need to be within its vicinity has a beneficial effect.

In a recently published book, Blinded by Science, the author Matthew Silverstone, proves scientifically that trees do in fact improve many health issues such as concentration levels, reaction times, depression, stress and other various forms of mental illness. He even points to research indicating a tree’s ability to alleviate headaches in humans seeking relief by communing with trees.

The author points to a number of studies that have shown that children show significant psychological and physiological improvement in terms of their health and well being when they interact with plants and trees. Specifically, the research indicates that children function better cognitively and emotionally in green environments and have more creative play in green areas. Also, he quotes a major public health report that investigated the association between green spaces and mental health concluded that “access to nature can significantly contribute to our mental capital and wellbeing”.

So what is it about nature that can have these significant effects? Up until now it has been thought to be the open green spaces that cause this effect. However, Matthew Silverstone, shows that it is nothing to do with this by proving scientifically that it is the vibrational properties of trees and plants that give us the health benefits and not the open green spaces.

The answer to how plants and trees affect us physiologically turns out to be very simple. It is all to do with the fact that everything vibrates in a subtle manner, and different vibrations affect biological behaviours. One research experiment showed that if you drink a glass of water that has been treated with a “10Hz vibration” your blood coagulation rates will change immediately on ingesting the treated water. It is the same with trees, when touching a tree its different vibrational pattern will affect various biological behaviours within your body. 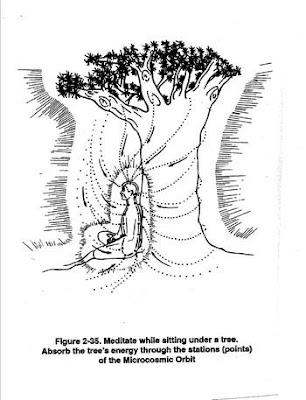 This vibrational idea is backed up throughout the book by a number of scientific studies to provide convincing proof that tree hugging has incredible benefits to us. One report even concluded the following: “safe, green spaces may be effective in treating some forms of mental illnesses”. There is one other school of thought are in alignment with this remarkable theory: Taoism. For example, the Taoist master Mantak Chia teaches students to meditate with trees, as a way of release “negative energies.” In his Cosmic Tree Healing Qigong method, Master Chia teaches how to align one’s body with the “aura” (or energetic field) of a tree. He explains that trees are natural processors that can help you transform your body’s sick or negative energy into positive, vital life force energy. As you connect your energy with the tree you facilitate your own physical and emotional healing. The Taoist theory is that because trees stand very still, they are better at absorbing the Earth’s Energy and the Universal Force from the Heavens. Trees and all plants have the ability to absorb the light frequencies and transform them into physical food; and they do the same with energetic food. The Taoist view of trees is to see them constantly in meditation, with subtle energy as their natural language. 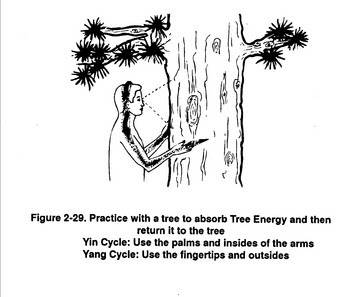 One other fascinating laboratory that studies plant vibrational energies is Damanhur, an intentional community in Italy. In this peaceful and spiritual ecovillage there is a laboratory in the woods that offers a beautiful choir of singing trees. Yeah, you read that right… Singing trees. Since 1976, researchers at Damanhur have invented and developed equipment that can capture electromagnetic changes on the surface of leaves and roots, transforming them into actual sounds. The best part is, these trees seem to control their electrical responses via a feedback mechanism, and demonstrate a kind of awareness and preference for types of music. The singing plants and trees of Damanhur have sparked off such a worldwide fascination that the people began organizing “Plant Concerts”, where musicians perform to the music created by the trees.

Watch this 15-minute video of a beautiful demonstration singing plants while one of Damanhur’s researchers explain the phenomenon.

What you can do:  Get off the web and go for a walk in nature! And go meditate with a tree! 38% of Americans Refuse to Buy Corona Beer “Under Any Circumstance” 6.2K Views Fossils of New Type of Lion the Size of a ‘Pussy Cat’ Discovered in Australia 42.2K Views Create Your Own Magical Moon Garden With Flowers That Bloom at Night 41.9K Views Up to 110 tons of garbage can be collected by one barge, drastically reducing the amount of waste reaching oceans. “I would think that many of the animals … would have been shaking in their little furry boots when they saw this animal come along.”