Take a tour of the world’s apparently robust supply of statues, buildings, and temples–and witness the surprising grandeur of dilapidation.

(Italian: “Il Cristo degli Abissi”) is a submerged bronze statue of Jesus, of which the original is located in the Mediterranean Sea off San Fruttuoso between Camogli and Portofino on the Italian Riviera. It was placed in the water on 22 August 1954 at approximately 17 metres depth, and stands c. 2.5 metres tall. Various other casts of the statue are located in other places worldwide, both underwater and in churches and museums.
http://en.wikipedia.org/wiki/Christ_of_the_Abyss

(Afrikaans for Coleman’s hill, German: Kolmannskuppe) is a ghost town in the Namib desert in southern Namibia, a few kilometres inland from the port town of Lüderitz. It was named after a transport driver named Johnny Coleman who, during a sand storm, abandoned his ox wagon on a small incline opposite the settlement. Once a small but very rich mining village, it is now a popular tourist destination run by the joint firm NamDeb (Namibia-De Beers).
http://en.wikipedia.org/wiki/Kolmanskop

Built in Naples in 1981, the futuristic igloos seen above may not be around much longer. Falling into disrepair, one dome home owner seeking to restore the vintage vestibule has encountered nothing but exorbitant fines and bureaucratic hassles in the process.
http://all-that-is-interesting.com/floridas-bizarre-dome-homes

SS Ayrfield (originally launched as SS Corrimal) was a steel-hulled, single screw, steam collier of 1140 tonnes and 79.1m in length. It was built in the UK in 1911 and registered at Sydney in 1912. It was purchased by the Commonwealth Government and used to transport supplies to American troops stationed in the Pacific region during WWII.
http://www.afloat.com.au/afloat-magazine/2008/may-2008/The_Wrecks_of_Homebush_Bay

Get the latest from The Mind Unleashed in your inbox. Sign up right here.
Via: photoree.com

Wonderland is an abandoned amusement park construction project located in Chenzhuang Village, Nankou Town, Changping District, People’s Republic of China, about 20 miles (32 kilometers) outside of Beijing. Originally proposed by the Thailand based property developer Reignwood Group, and designed to be the largest amusement park in Asia (to have covered 120 acres (49 ha)), construction stopped in 1998 following financial problems with local officials, while a 2008 attempt to start construction again also failed.The site, which features a number of abandoned structures, including the frame work of a castle-like building and medieval-themed outer buildings, is being reclaimed by local farmers.
http://en.wikipedia.org/wiki/Wonderland_Amusement_Park_(Beijing)

Holland Island is a marshy, rapidly eroding island in the Chesapeake Bay, in Dorchester County, Maryland, west of Salisbury. The island was once inhabited by watermen and farmers, but has since been abandoned. It is located in the Holland Strait, between Bloodsworth Island and Smith Island, six miles west of Wenona, Maryland.
http://en.wikipedia.org/wiki/Holland_Island

8. The Kerry Way walking path between Sneem and Kenmare in Ireland

The Kerry Way (Irish: Slí Uíbh Ráthaigh) is a long-distance trail in County Kerry, Ireland. It is a 214-kilometre (133-mile) long circular trail that begins and ends in Killarney. It is typically completed in nine days.It is designated as a National Waymarked Trail by the National Trails Office of the Irish Sports Council and is managed by Kerry County Council, South Kerry Development Partnership and the Kerry Way Committee. The Way circles the Iveragh Peninsula and forms a walkers’ version of the Ring of Kerry road tour. It is the longest of Ireland’s National Waymarked Trails.
http://en.wikipedia.org/wiki/Kerry_Way 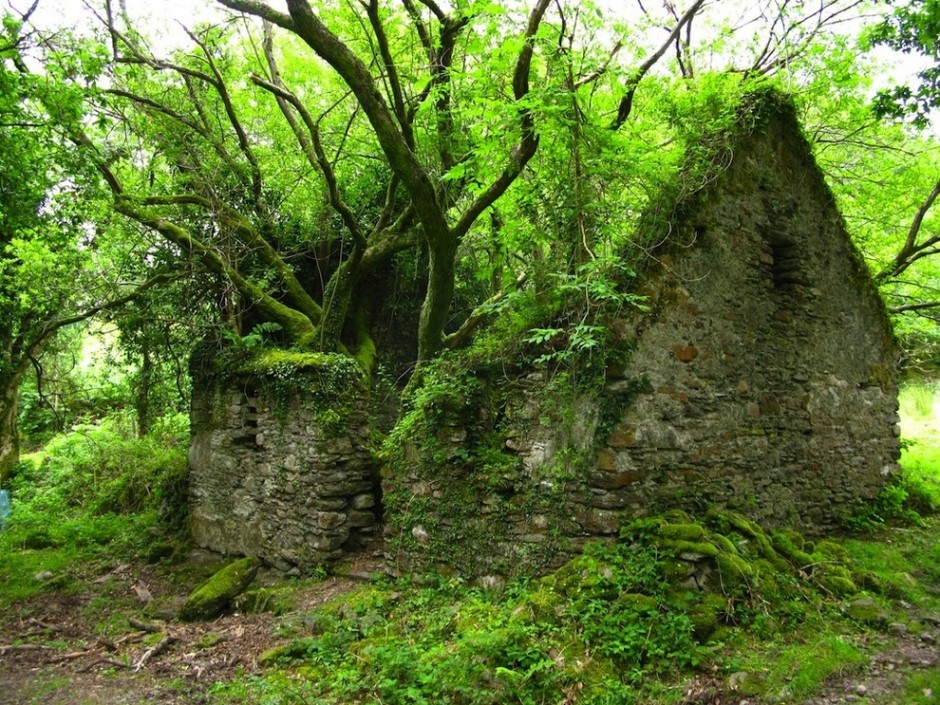 Pripyat (Ukrainian: При́п’ять, Pryp’yat’; Russian: При́пять, Pripyat’) is a ghost town near the Chernobyl Nuclear Power Plant, within the Chernobyl Exclusion Zone, part of Kiev Oblast (province) of northern Ukraine, near the border with Belarus.The city has a special status within the Kiev Oblast, being the city of oblast-level subordination (see Administrative divisions of Ukraine), although it is located within the limits of Ivankiv Raion. The city also is being supervised by the Ministry of Emergencies of Ukraine as part of the Chernobyl Exclusion Zone jurisdiction.

The monastery was founded in 1084–85 in the Black Forest, by the source of the Brigach, against the background of the Investiture Controversy, as a result of the community of interests of the Swabian aristocracy and the church reform party, the founders being Hezelo and Hesso of the family of the Vögte of Reichenau, and the politically influential Abbot William of Hirsau. The intended site was initially to be at Königseggwald in Upper Swabia, but at William’s behest St. Georgen was chosen instead. The settlement, by monks from Hirsau Abbey, took place in the spring and summer of 1084; the chapel was dedicated on 24 June 1085.
http://en.wikipedia.org/wiki/St._George%27s_Abbey_in_the_Black_Forest

Kalavantin durg is situated aside the prabalgad,the pinnacle is in clouds during rains half of the time. The base village for the climb is Prabalmachi. A majestic trek and awesome place to visit during monsoon.

12. The remains of the Pegasus in McMurdo Sound, Antarctica

Pegasus Field (ICAO: NZPG) is an airstrip in Antarctica, the southernmost of three airfields serving McMurdo Station. Pegasus is a blue ice runway capable of handling wheeled aircraft year-round, and the principal Ice Runway on the sea-ice available during the summer Antarctic field season. The other two are the snow runways at Williams Field that are limited to ski-equipped aircraft. The field is named after Pegasus, a C-121 Lockheed Constellation, still visible there in the snow after crashing in bad weather on October 8, 1970. No one on board was injured.
http://en.wikipedia.org/wiki/Pegasus_Field

Angkor Wat (Khmer: អង្គរវត្ត) is the largest Hindu temple complex and the largest religious monument in the world. The temple was built by the Khmer King Suryavarman II in the early 12th century in Yasodharapura (Khmer: យសោធរបុរៈ, present-day Angkor), the capital of the Khmer Empire, as his state temple and eventual mausoleum. Breaking from the Shaivism tradition of previous kings, Angkor Wat was instead dedicated to Vishnu. As the best-preserved temple at the site, it is the only one to have remained a significant religious centre since its foundation – first Hindu, then Buddhist. The temple is at the top of the high classical style of Khmer architecture. It has become a symbol of Cambodia,appearing on its national flag, and it is the country’s prime attraction for visitors.
http://en.wikipedia.org/wiki/Angkor_Wat

The Maunsell Forts were small fortified towers built in the Thames and Mersey estuaries during the Second World War to help defend the United Kingdom. They were named after their designer, Guy Maunsell. The forts were decommissioned in the late 1950s and later used for other activities. One became the Principality of Sealand; boats visit the remaining forts occasionally, and a consortium called Project Redsands is planning to conserve the fort situated at Redsand.
www.fivelightsdown.co.uk

Bodiam Castle is a 14th-century moated castle near Robertsbridge in East Sussex, England. It was built in 1385 by Sir Edward Dalyngrigge, a former knight of Edward III, with the permission of Richard II, ostensibly to defend the area against French invasion during the Hundred Years’ War. Of quadrangular plan, Bodiam Castle has no keep, having its various chambers built around the outer defensive walls and inner courts. Its corners and entrance are marked by towers, and topped by crenellations. Its structure, details and situation in an artificial watery landscape indicate that display was an important aspect of the castle’s design as well as defence. It was the home of the Dalyngrigge family and the centre of the manor of Bodiam.
http://en.wikipedia.org/wiki/Bodiam_Castle

In April, a 76-foot Brazilian yacht named Mar Sem Fin (Endless Sea) sank off the coast of Antarctica, likely due to ice compression and strong winds. Four crew members were rescued from the yacht, which is owned by Brazilian journalist João Lara Mesquita, who was in the region producing a documentary, according to MercoPress.
http://au.businessinsider.com/photo-of-a-sunken-yacht-in-antarctica-2012-8 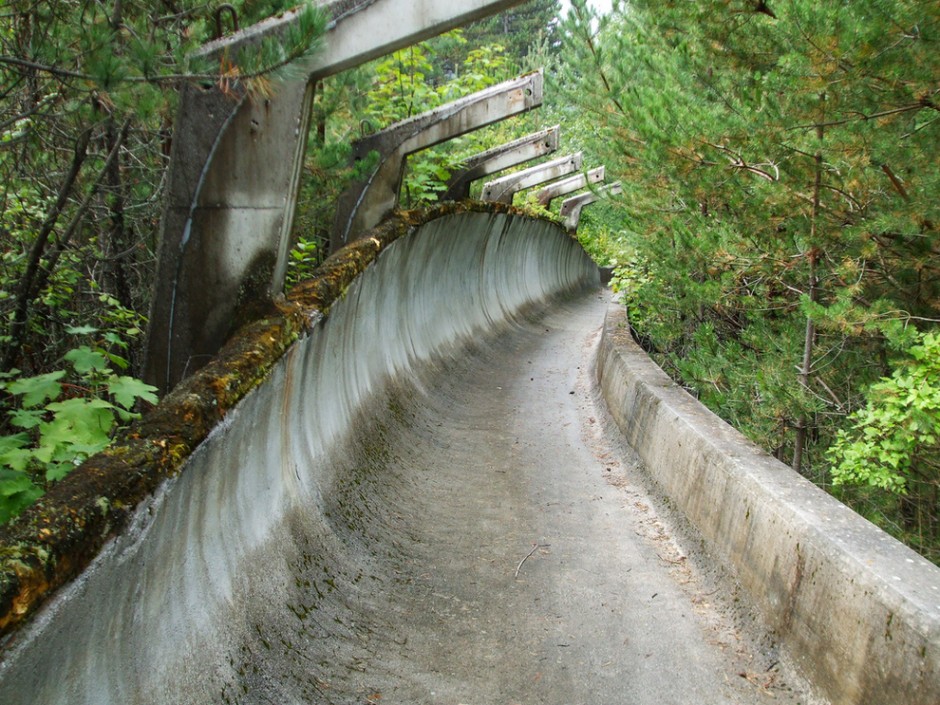 Craco is an abandoned commune and medieval village located in the Region of Basilicata and the Province of Matera in Italy. About 25 miles inland from the Gulf of Taranto at the instep of the “boot” of Italy. It is typical of the hill towns of the region with mildly undulating shapes and the lands surrounding it sown with wheat. It was abandoned in 1963 due to recurring earthquakes.
http://en.wikipedia.org/wiki/Craco

These incredible pictures were taken by a young Russian woman after she crept inside a factory belonging to one of the world’s top manufacturers of liquid-fuel rockets. Lana Sator found her way into one of NPO Energomash’s huge factories outside the Russian capital Moscow, without coming across a single security guard – or indeed any other employees at all.
Read more: DailyMail 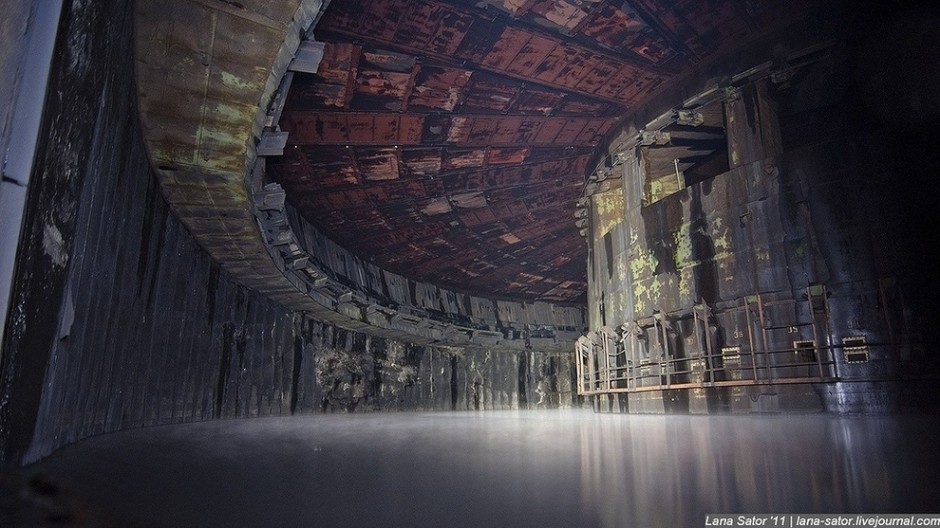 The Valley of the Mills, “The name Valley of the Mills, derives from the existence of a mill – functioning since the beginning of the ’900′s – used for grinding wheat. Attached to the mill, rose a sawmill which furnished chaff to the Sorrentine cabinet makers. Everything is completed by a public wash-house used by the women. The creation of Tasso Square, since 1866, determined the isolation of the mill area from the sea, provoking a sharp rise of the percentage of humidity, which made the area unbearable and determined its progressive abandon.”
http://ngm.nationalgeographic.com/ngm/photo-contest/2012/entries/167692/view/

Photographer Richard Gubbels out of Utrecht, Netherlands shot these amazing photos inside the cooling tower of an abandoned power plant. 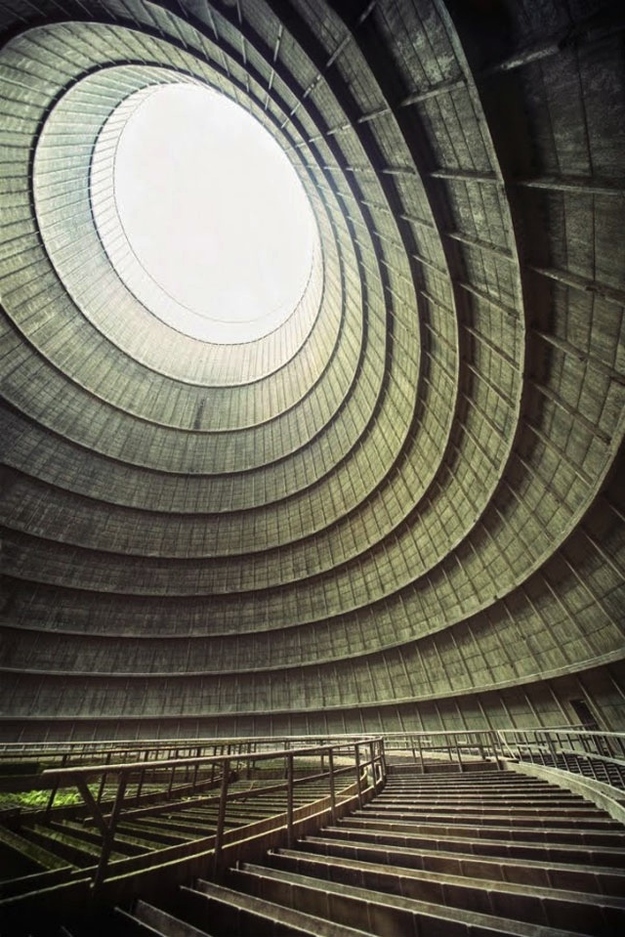 25. House of the Bulgarian Communist Party

The House of the Bulgarian Communist Party was built in another era, however, one that long ago crumbled along with the way of life it embodied. After the fall of the Iron Curtain in 1989, Bulgaria moved into a new age of parliamentary democracy.
http://www.dailymail.co.uk/news/article-2117506/Monument-troubled-past-Inside-crumbling-communist-HQ-Bulgaria-afford-maintain-demolish.html 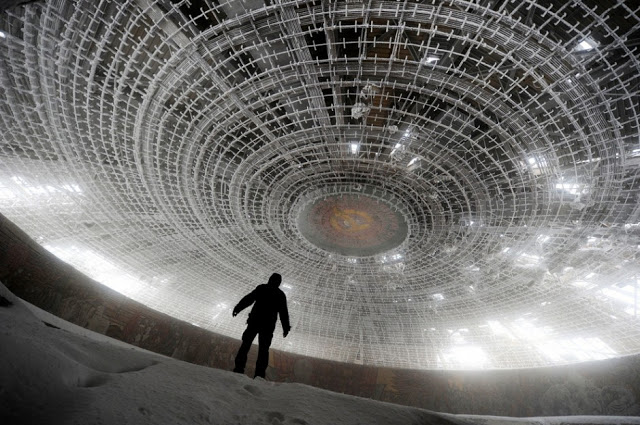 When the Lawndale Theater of North Lawndale, IL closed permanently in the mid 2000s, it had been in use primarily as a church. The balcony was sealed off from the main level when the theater was converted into a church.
http://afterthefinalcurtain.net/2011/07/19/lawndale-theatre/

North Brother Island is an island in the East River situated between the Bronx and Riker’s Island. Its companion, South Brother Island, is a short distance away. Together, the two Brother Islands, North and South, have a land area of 20.12 acres (81,400 m2).
http://en.wikipedia.org/wiki/North_Brother_Island,_East_River

Tequendama Falls (or Salto del Tequendama) is a major tourist attraction about 30 km southwest of Bogotá, the capital city of Colombia. The thousands of tourists who visit the area to admire the 157 metre (515 feet) tall waterfall and the surrounding nature, make a stop at another nearby landmark as well, the abandoned Hotel del Salto. The luxurious Hotel del Salto opened in 1928 to welcome wealthy travelers visiting the Tequendama Falls area. Situated just opposite to the waterfall and on the edge of the cliff, it provided a breathtaking view to its guests. During the next decades though, Bogotá river was contaminated and tourists gradually lost their interest to the area. The hotel finally closed down in the early 90′s and was left abandoned ever since. The fact that many people in the past chose that spot to commit suicide, made others believe that the hotel is haunted.
http://desertedplaces.blogspot.com/2012/08/the-haunted-hotel-at-tequendama-falls.html

Nara Dreamland (奈良ドリームランド Nara Dorīmurando) was a theme park near Nara, Japan which was built in 1961 and inspired by Disneyland in California. On August 31, 2006, Nara Dreamland closed permanently.
http://en.wikipedia.org/wiki/Nara_Dreamland

Scientists in Britain May Have Just “Accidentally” Found a Cure for Cancer 7.8K Views

Scientists Believe We’re Closer to the End of the World Than Ever Before 44.1K Views

Biolab for “Most Dangerous Pathogens on Earth” Opened in Wuhan Before Outbreak 17.5K Views