The University of Chicago’s Oriental Institute is presenting two 30-foot long papyri copies of the Egyptian Book of the Dead, each beautifully illustrated with images and text. The Book of the Dead offers incredible insight as to how the ancient Egyptians dealt with our mortality.

The Egyptian Book of the Dead was written only for a single person to help them traverse a conscious experience of the after-life.

The Egyptian Book of the Dead contained magic spells as well as instructions for traversing the afterlife, along with funerary rituals to help ease a passing soul through the world beyond this world. It differs only slightly from the Tibetan Book of the Dead, which offers similar wisdom.

Reproduction of a page of the Tibetan Book of the Dead, the Bardo Thodol Image: Biblotecapleyadas

Interestingly, the author of the Tibetan Book of the Dead, Padmasambhava, was not a traditional Tibetan Buddhist. He wrote many esoteric teachings from other cultures into his book – some of which may have been influenced by ancient Egypt.

Also of note are the similarities in the wisdom contained in each book. The Tibetan Book of the Dead describes six different Bardos or six states of consciousness where enlightenment is possible.

Similarly, the Egyptians believed that the soul could be aided with certain rituals to transfer consciousness between lifetimes.

The Egyptian concept of soul was divided into three spirit entities. The Ka, the Ba and the Akh.

The soul leaving the body upon death as depicted in ancient Egyptian pictographs.

“The ka was essentially a person’s double.  It was the life force and at death it was separated from the body.The reason for extensive and elaborate preparation for the body for the after life was to ensure the ka had a home.  The living would sometimes provide bread, beer, oxen and fowl to feed the ka for the afterlife.  They also believed the deceased body would have to resemble the past living body as much as possible so the ka could recognize its body and then the ba would “return to it each night after spending time in the sunshine.”

Modern science still struggles to explain the massive electrical impulses in our bodies at the time of death, and the unexplainable rise in consciousness that seems to happen when we are close to death. In fact, Jimo Borjigin, a neuroscientist at the University of Michigan, says that,

“Doctors assume that after clinical death, the brain is dead and inactive. They use the term ‘unconscious’ again and again. But death is a process. It’s not a black-or-white line.”

In a recent study, Borjigin realized that rats show an unexpected pattern of brain activity immediately after cardiac arrest. With neither breath nor heartbeats, these rodents were clinically dead but for at least 30 seconds. Their brains showed several signals of strong conscious thought. This suggests that our final journey into permanent unconsciousness may actually involve a brief state of heightened consciousness.

The afterlife was not seen as an end to our conscious experience, but simply a continuation of life on earth, after one had passed through various difficulties and judgement in the Hall of Truth, a paradisiacal place to contemplate one’s experience in the previous form.

Moreover, The [Egyptian]  Book of the Dead was never codified and no two copies of the work are exactly the same.

They were created specifically for each individual who could afford to purchase one as a kind of manual to help them after death. 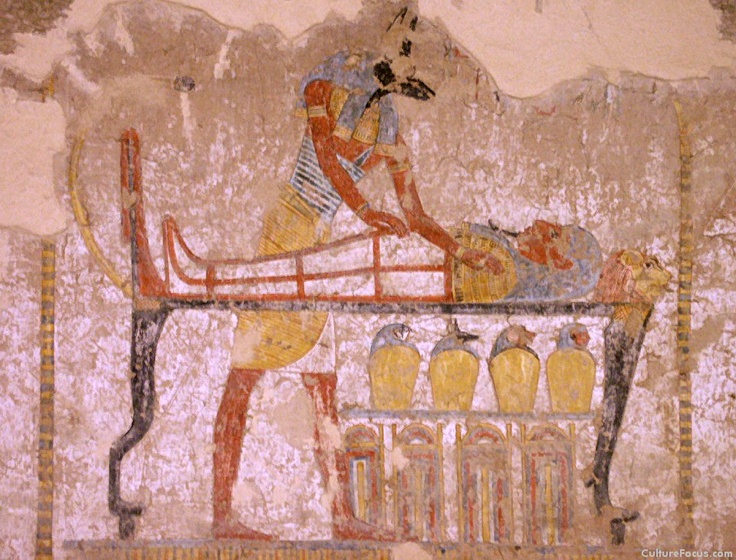 The Egyptian God Anubus preparing a mummy for the afterlife.

“The Egyptian Book of the Dead is a term coined in the nineteenth century CE for a body of texts known to the Ancient Egyptians as the Spells for Going Forth by Day. After the Book of the Dead was first translated by Egyptologists, it gained a place in the popular imagination as the Bible of the Ancient Egyptians. The comparison is very inappropriate. The Book of the Dead was not the central holy book of Egyptian religion. It was just one of a series of manuals composed to assist the spirits of the elite dead to achieve and maintain a full afterlife.”

So, for those with an eye for ancient Egyptian cuneiform, the papyrus scrolls being presented at the Chicago exhibit are for one passing soul – a map – you might say, to help them navigate a heightened consciousness which allows them to understand why they are being reincarnated into their next life, and the wisdom to take all that they’ve learned from this life, into their next experience.