“Superheroes” are all around us. They may not wear capes, but they are willing to go the distance when a cry for help is heard. After trekking 8 miles through the snow to operate on a colon cancer patient, consultant surgeon Linsey Chisholm is being hailed as a superhero. After reading the story below, you may agree that she is deserving of the title.

Earlier this week, much of Scotland was brought to a standstill following heavy snow and freezing temperatures. As the BBC reports, a red alert was issued as snow fell on Wednesday afternoon. Those who ignored the warming spent the night stuck in their vehicles on the M80.

Chisholm herself barely made it home Wednesday evening. The next day, the weather was still poor. For this reason, she decided to wake up early and walk eight miles to the Royal Alexandra Hospital. There, a patient with colon cancer was scheduled to undergo surgery.

“I do a bit of winter walking and I’ve got decent equipment and clothing and a pair of snow-shoes so I thought I could walk to work,” said Chisholm. “I got up early on Thursday morning, saw there was quite a lot of snow but it didn’t look impossible.” 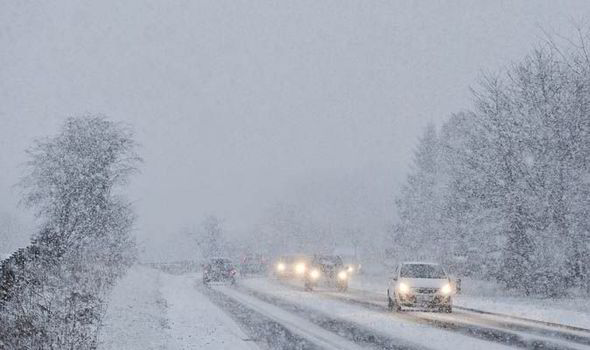 The trek was “really quiet,” according to the surgeon. Reportedly, her biggest concern was whether or not there would be someone in the control box at the Clyde Tunnel, which would take her south of the river to open the pedestrian access gate. Three hours after departing from her home, Chisholm made it to the hospital. Her colleagues couldn’t help but laugh at her winter gear, goggles and snow poles.

Though she has received commendation for her determination to go to work, Chisholm says she doesn’t think it was a big deal. Plenty of other staff managed to make it in, she said.

“I had the right equipment, I knew there was no avalanche risk, I was not going to get lost, there were places I could stop on the way if the weather did become absolutely terrible so I just didn’t think anything of it,” she said. Later that same day, Chisholm performed a second cancer operation. Cancer patient Iain McAndrew was “gobsmacked” when he saw the surgeon arrive still wearing her winter trekking gear. He was convinced the surgery would not happen that day but was pleasantly surprised by the surgeon’s arrival.

“When she walked in my heart took a wee jump. I thought it was amazing. If there is a real-life superwoman she is it,” said McAndrew. “She told me my operation would be on, which made me a very happy chappy.” One of the surgeon’s many “thank you” cards.
Credit: BBC

“It felt like a Christmas Day because she came in with all her winter stuff on and she told me she had walked in from her home,” he added. “I couldn’t believe she’d walked nearly eight miles to do surgery on me. She’s just a very nice person and I hope people applaud what she has done for me and what she has done for the NHS to prove that the good people work for the NHS.”