(TMU) — Police have declared there are no more survivors after a sudden eruption on New Zealand’s White Island left at least five people dead and more than 30 wounded Monday.

The death toll is expected to rise but the area remains too dangerous for emergency workers to reach the island. It is not yet clear when it will be safe to do so.

“No signs of life have been seen at any point,” police have said. Both New Zealanders and foreign tourists are among the dead, missing, and wounded.

The privately owned island, also known as Whakaari, it’s Māori name, sits about 30 miles off the coast New Zealand’s North Island in the Bay of Plenty and sees around 10,000 visitors per year. At the time of the eruption, around 50 people were on the uninhabited island—all of them tourists or tour guides.

The majority of those visiting the island were thought to be passengers on the Royal Caribbean cruise ship, Ovation of the Seas.

In a statement given to Newsweek, Royal Caribbean spokesperson Melissa Charbonneau said:

“We are devastated by today’s events and our hearts go out to all those affected by this tragedy.

We are working together with local authorities, and we are providing all the help and care we can to our guests and their families, including offering medical resources and counseling.

We are also sending staff members from both our ship and our Sydney and Auckland offices to assist family members however possible. Ovation of the Seas will remain in port as long as needed to assist with the situation.”

Whakaari is the 800 acre tip of the submarine volcano that has been in almost continuous stage of releasing gas, making it the country’s most active volcano.

Around 2 pm Monday, the volcano began shooting clouds of ash and debris into the air, which eventually blanketed the entire island, but not before some tourists were able to escape. 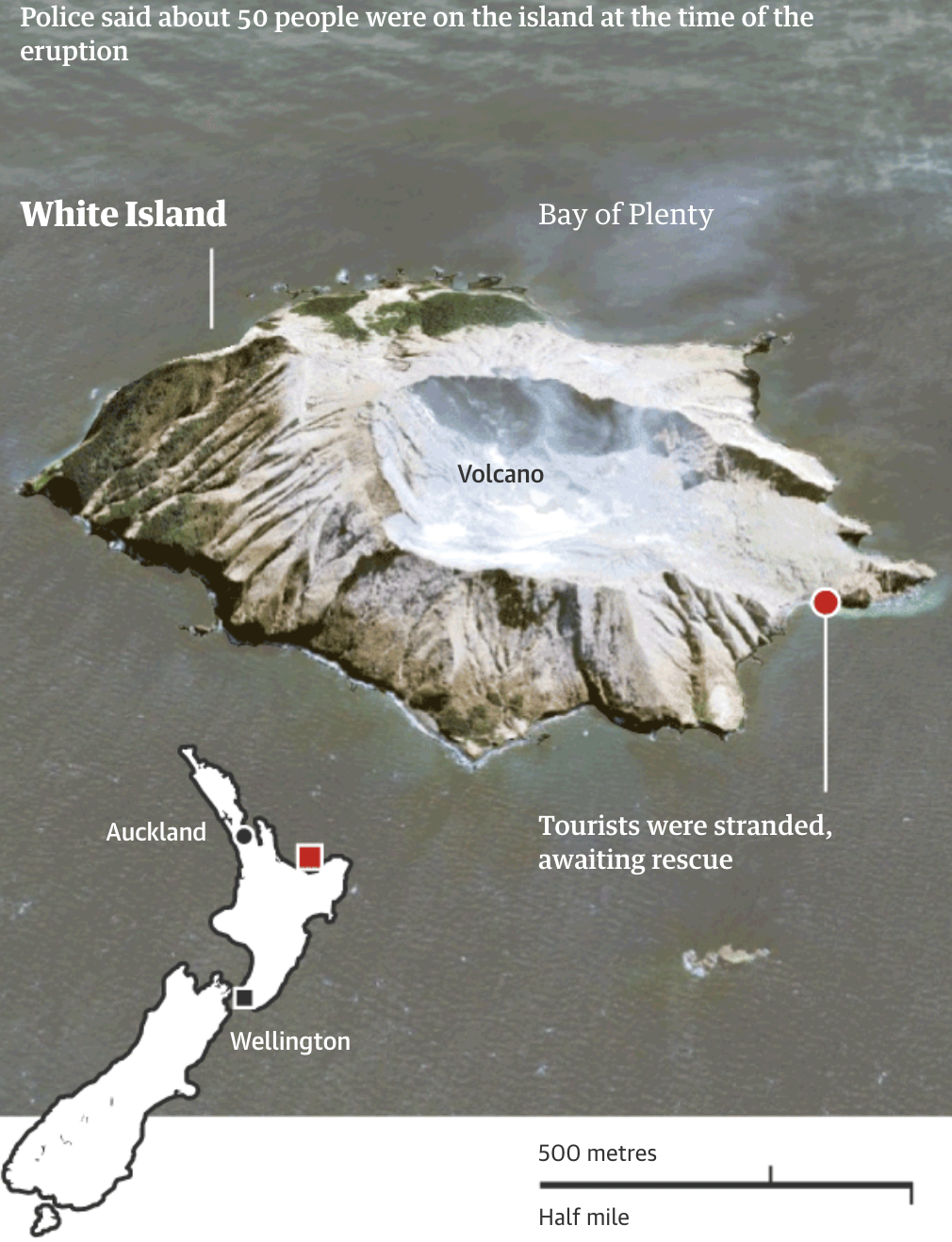 According to video posted to Twitter, one family was on the volcano 20 minutes prior to the eruption and was waiting for a rescue boat at the time. According to the post, the boat was able to rescue some people and tend to those with injuries.

American tourist Michael Schade was aboard one of the tour boats tending to the injured. Schade said survivors were burned “to different levels of severity.”

“We were all busy the entire time, just trying to stay out of the way of people who knew what they were doing and also just to help out wherever we could.”

Schade captured footage and images as the volcano erupted. 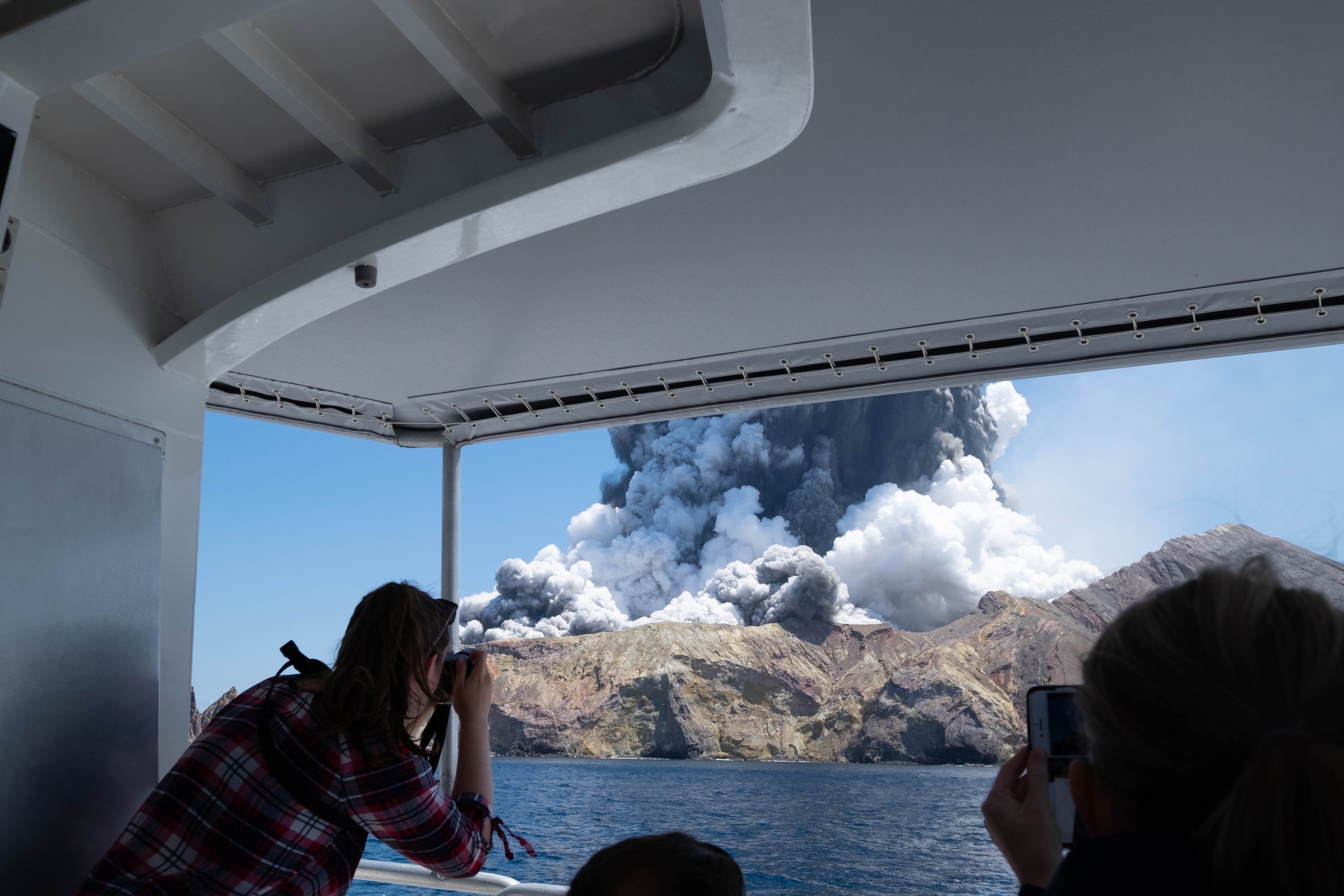 According to the Independent, tour operators were taking people off the island before it was declared unsafe to do so. 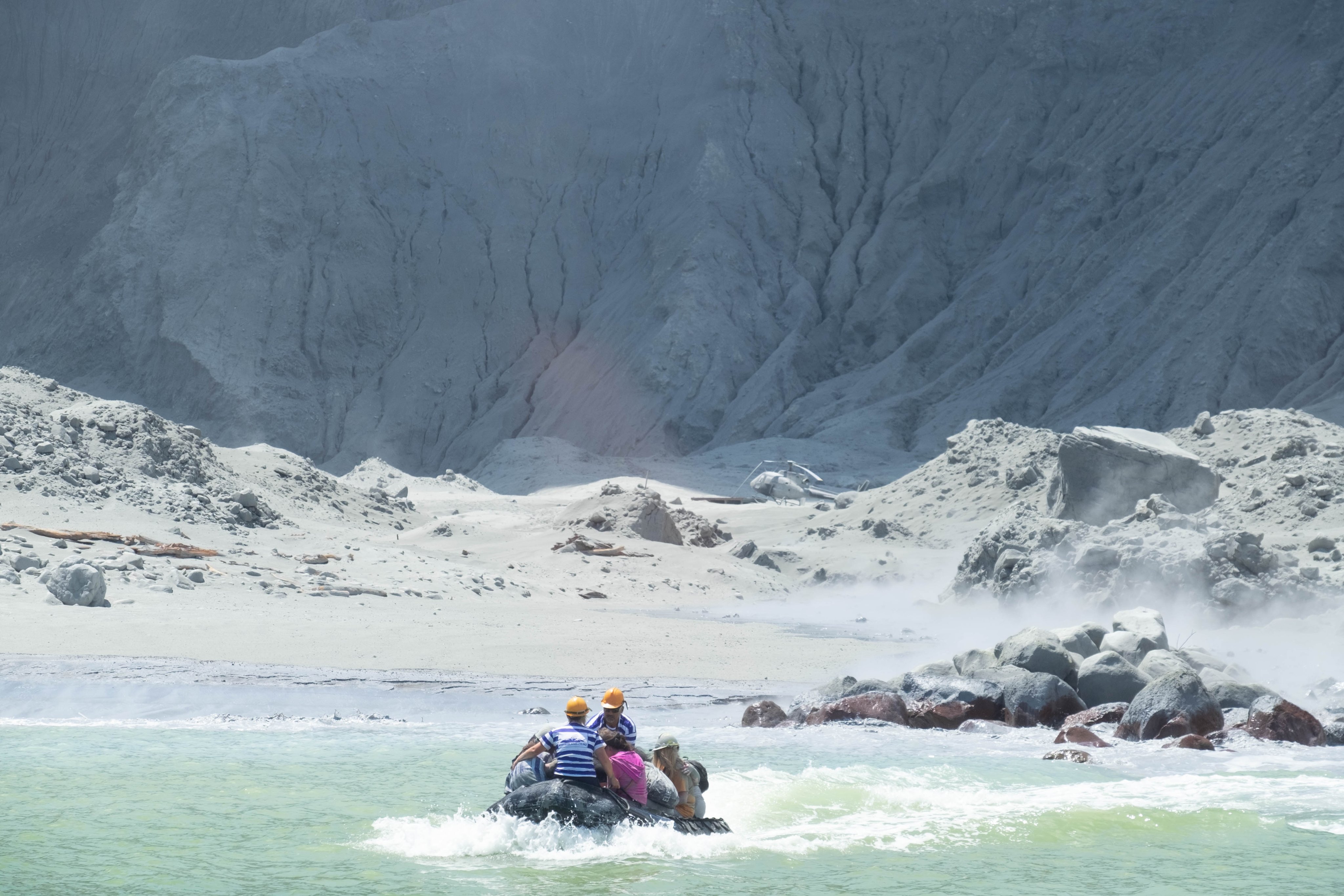 In footage taken by the volcano’s crater camera, people seen were in the area only minutes before the eruption began.

“The Police Eagle helicopter, rescue helicopter, and NZDF aircraft have undertaken a number of aerial reconnaissance flights over the island since the eruption.

No signs of life have been seen at any point. Police believe that anyone who could have been taken from the island alive was rescued at the time of the evacuation.

Based on the information we have, we do not believe there are any survivors on the island.

[We are] working urgently to confirm the exact number of those who have died, further to the five confirmed deceased already.”

A damaged helicopter belonging to Volcanic Air is visible in footage from the island. The helicopter’s pilot and four passengers were unharmed during the eruption and fled the island by boat. A company spokesperson said:

“Volcanic Air has confirmed it had a helicopter on Whakaari/White Island at the time it erupted this afternoon. Five people had flown to the island in the helicopter, but all are accounted for and have arrived back in Whakatane by boat.”

“It is now clear there were two groups on the island. Those who were able to be evacuated, and those who were close to the eruption.

We can confirm that among those currently listed as missing or injured are New Zealanders who were part of the tour operation, and tourists from Australia, the United States, the UK, China and Malaysia. That is to the best of our knowledge.”

While Monday’s eruption is the first deadly eruption since 1914, experts contend the island is and has been too dangerous for tourists. Ray Cas, professor emeritus at Monash University, said:

“White Island has been a disaster waiting to happen for many years.

Having visited it twice, I have always felt that it was too dangerous to allow the daily tour groups that visit the uninhabited island volcano by boat and helicopter.”

Dr. Ken Glairdhill, of GNS Science, said that the eruption was not “particularly big” but that the volcano had been showing “increased activity for the last few weeks.” As a result of that increase in activity, the alert level for Whakaari was raised to four on a scale of zero to five—with level five indicating a major eruption. According to GeoNet, a “moderate volcanic eruption” was possible.