(TMU) — On Wednesday, the National Science Foundation (NSF) released the highest resolution image of the Sun’s surface ever taken.

The image was taken on December 10, 2019 by the Daniel K. Inouye Solar Telescope (DKIST)—the largest solar telescope in the world.

“These are the highest-resolution images and movies of the solar surface ever taken. Up to now, we’ve just seen the tip of the iceberg.”

The new telescope on Haleakalā in Maui was built to study the Sun and the images it has captured show breathtaking detail far beyond anything that had been previously captured until now. Rimmele said the telescope will help “unravel the Sun’s biggest mysteries.”

The small sections seen in the photos are actually convection granules and they’re huge—the U.S. state of Texas huge.

Of the photos, University of Hawaiʻi at Mānoa’s Institute for Astronomy astronomer Jeff Kuhn said:

“It is literally the greatest leap in humanity’s ability to study the Sun from the ground since Galileo’s time.” 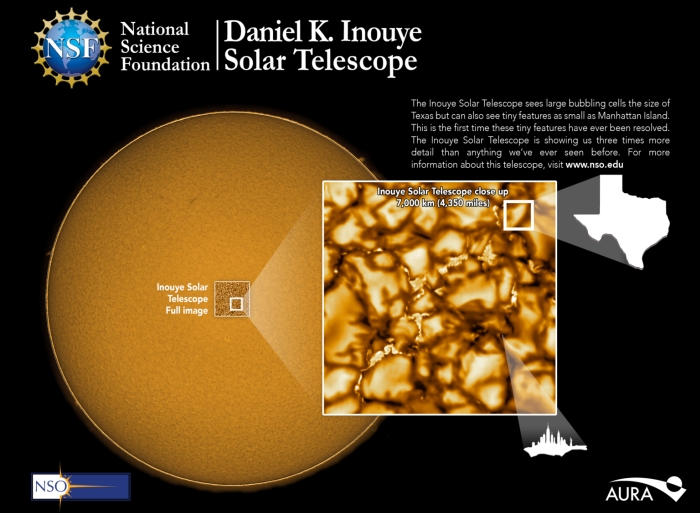 The image release marks the beginning of what scientists hope will be an almost 50-year study of the Sun that covers two of the Sun’s 22-year solar cycles. And as it turns out, while construction on DKIST began in 2012, it isn’t even fully operational despite having captured such stunning first of their kind images.

Back on December 10, only the Visible Broadband Imager (VBI) was operational. On Thursday of last week (January 23), DKIST’s second instrument, the Visible Spectro-polarimeter (VISP), came online. According to space.com, “VISP splits light into its component colors to provide precise measurements of its characteristics along multiple wavelengths.”

All instruments should be operational by July 2020.

Thanks to DKIST’s resolution and sensitivity, the telescope will be able to probe the Sun’s magnetic field when it is fully operational. DKIST will explore what drives space weather and those pesky charged particles the Sun releases that interfere with things here on Earth—like satellites, power grids, and even communication infrastructure.

Matt Mountain of the Association of Universities for Research in Astronomy explained:

“On Earth, we can predict if it is going to rain pretty much anywhere in the world very accurately, and space weather just isn’t there yet.”

If all goes according to plan, DKIST should also shed some light onto why it is that the Sun’s fiery’s halo is actually hotter than its surface.

“The real power in the Inouye Solar Telescope is its flexibility, its upgradability,” Dave Boboltz, the program director for the National Science Foundation Astronomy Division, said. “It’s like having a Swiss Army Knife to study the sun.”

Carls Jr. is Celebrating 4/20 With Its First Ever CBD-Infused Burger