(TMU) — Forget everything you thought you knew about the effects of smoking. According to scientists, human lungs can “magically” repair themselves after even a lifelong smoker gives up on the habit.

We’ve all seen images of battered and severely damaged lungs thanks to cigarette smoking. For years it was generally accepted that the damage could lead to lung cancer and was permanent—even after quitting. While it has been well known that quitting smoking reduced the risk of developing cancer, scientists didn’t exactly know why, besides the obvious fact that you probably stop damaging your lungs as soon as you quit.

But according to a new study published in the journal Nature, people who had once smoked but quit had healthier lungs than current smokers and in turn those who had quit smoking had a lower risk of developing lung cancer. The surprising takeaway is that not only does quitting smoking stop you from further damaging your lungs, it also gives the remaining healthy cells a chance to replenish the lining of the lungs.

This unexpected effect was even observed in pack-a-day smokers who indulged in the bad habit for a whopping 40 years.

Cancer begins when one cell mutates and manages to replicate itself without being attacked and stopped. The plethora of chemicals in cigarette smoke can be responsible for this dangerous mutation that transforms health lung cells into dangerous cancerous ones.

According to the study, these mutations are happening in the lungs of smokers even before they develop full-blown cancer. In fact, “The overwhelming majority of cells taken from a smoker’s airways had been mutated by tobacco, with cells containing up to 10,000 genetic alterations,” the BBC reports.

Dr. Kate Gowers, one of the study’s researchers, called these mutated cells “mini time bombs, waiting for the next hit that causes them to progress to cancer.” For a cell to transform completely into a potentially deadly cancerous cell, it needs to undergo five to ten mutations. When it does, the bomb goes off and that mutated cell progresses to cancer.

Thankfully, a small number of cells appear unaffected by the chemicals and it is these cells that are able to grow, replicate, and then replace the severely damaged cells in the lungs after someone stops smoking.

So how did the researchers know just what damage was caused by smoking and what was perhaps normal wear and tear on the cells or mutations caused by something else?

“By sequencing the DNA of lung cancer cells in smokers and never-smokers, we know that smoking increases the number of mutations,” Sam Janes, Professor of Respiratory Medicine at UCL, and Dr. Peter Campbell wrote.

The chemicals in tobacco smoke cause a certain type of mutation. This creates a unique “signature” that is unlike the many other causes of damage to DNA, making it easier to find and track.

The researchers isolated normal cells from the airways of 16 study participants. They then grew those cells in an incubator in order to have enough DNA for sequencing. They found that mutations increased with age in the never-smokers group. Normal wear-and-tear accounted for 1,000-1,5000 mutations of normal lung cells. The cells from current smokers contained an extra 5,000 mutations, with some cells having as many as 10,000-15,000 mutations.

To verify the cause was indeed smoking, the researchers looked for the DNA signature mentioned above and they found it.

In ex-smokers, the researchers found two groups of cells. One included cells with mutations just like those found in current smokers but they also found completely normal cells with the same number of mutations found in those from the never-smokers group. These normal cells existed in ex-smokers at about four times the rate as they were found to exist in current smokers. And this finding was even present among ex-smokers who used to smoke a pack-a-day for more than 40 years. 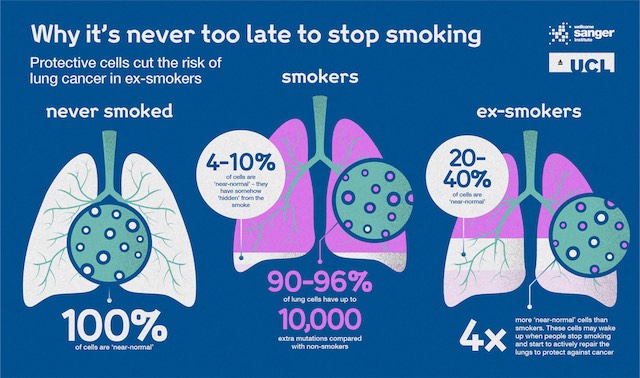 While this news is both exciting and encouraging, it should not be used to encourage current smokers or would-be smokers to continue or pick up the bad habit.

While we now know that healthy lung cells are able to replicate and help heal damaged lungs, this new knowledge won’t help those whose cells mutate so much so that they develop lung cancer the day, week, month, or year before dropping the habit. The best way to protect from developing lung cancer is to stop smoking now, even if you’ve smoked a pack-a-day for 40+ years.

It’s never too late to quit.

“It’s a really motivating idea that people who stop smoking might reap the benefits twice over—by preventing more tobacco-related damage to lung cells, and by giving their lungs the chance to balance out some of the existing damage with healthier cells. What’s needed now are larger studies that look at cell changes in the same people over time to confirm these findings.

The results add to existing evidence that, if you smoke, stopping completely is the best thing you can do for your health. It’s not always easy to kick the habit, but getting support from a free, local Stop Smoking Service roughly triples the chance of success compared to going it alone.”