(TMU Op-Ed) — Monday’s democratic caucus in Iowa has been nothing short of disastrous for the Iowa Democratic Party, for the DNC, for some candidates, and even for corporate media. While the actual caucus process has been mired in confusion and controversy, the way the debacle has been communicated by the corporate media has been anything but straightforward and honest.

Outsiders looking in on the Iowa caucus process, some for the very first time, as well as first-time—or even seasoned—caucus goers in Iowa would benefit from understanding the process in order to interpret whatever it is the corporate media has been doing for the last few days.

You may remember that in 2016 the caucus results in Iowa were close but I’m willing to bet that no one paid as much attention to the numbers or the process as they have this time around. Hillary Clinton walked away with 700.47 (49.84%) state delegate equivalents (SDEs) while Bernie Sanders had 696.92 (49.59%). What many people probably failed to notice in 2016 is that these numbers don’t include the actual number of people who voted—or the popular vote. In fact, this year is the first time that Iowa has recorded that information.

That’s right—in what many call the most important state in the primary battle, raw vote counts were never released. The Iowa caucuses have historically relied on SDEs to determine the number of delegates that go to the Democratic National Convention. The obvious question is: what the heck is a state delegate equivalent?

Few people even in Iowa can answer this question simply or accurately, which makes it fairly odd that these are the numbers we see plastered across corporate media here, here, and here. 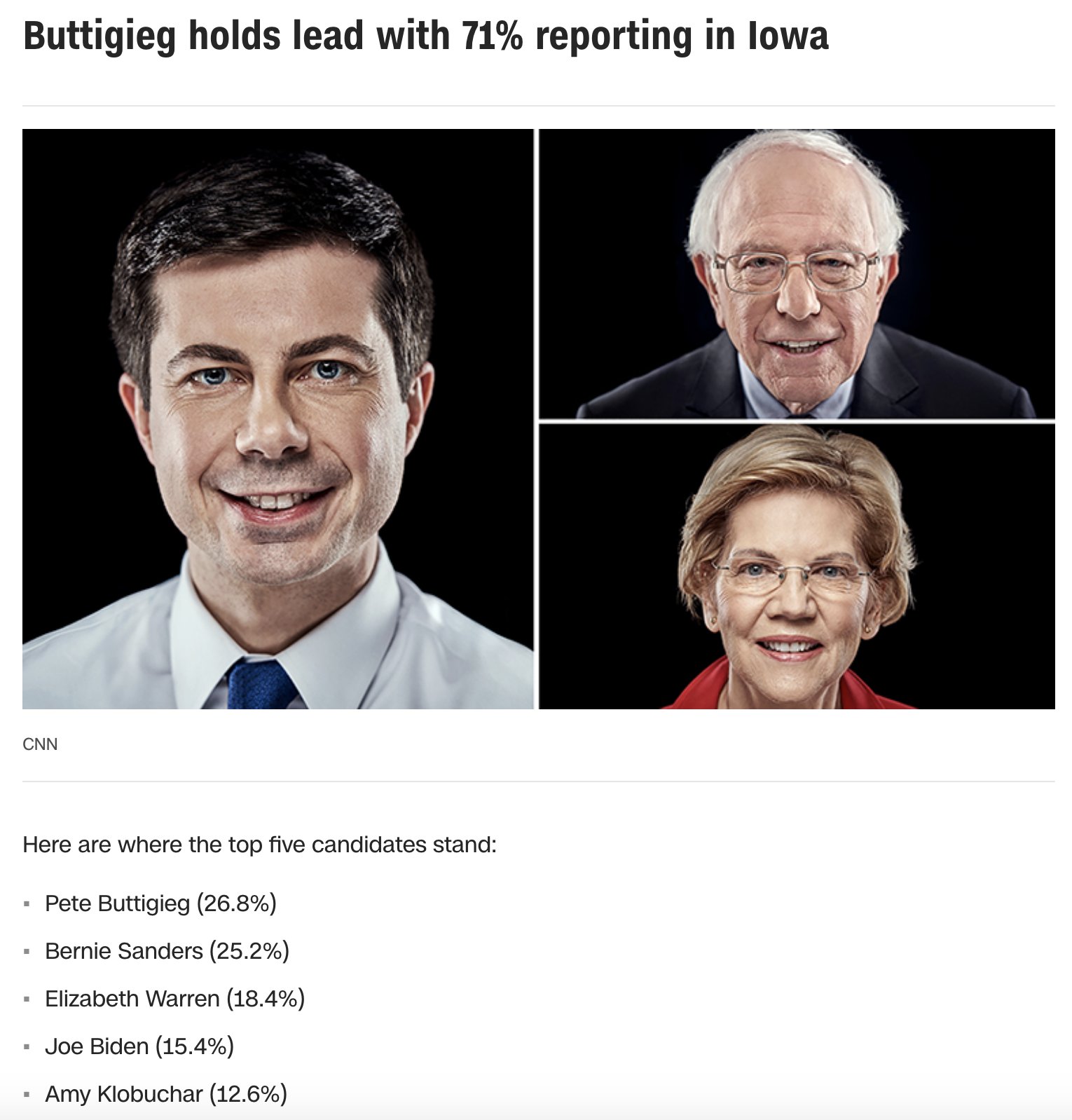 As you may have noticed by now, like this guy did live on MSNBC, three sets of data came out of Iowa and one of them—the SDEs—makes less sense than the others.

And as many observing the caucuses have, you may have also noticed that one set of data consistently shows Buttigieg in the lead (as evidenced by the screen shots above) while the other numbers show Bernie Sanders in the lead.

Before the results came in, MSNBC‘s Steve Kornacki broke down this year’s changes in Iowa in a helpful video during which he says, “These are going to be the most transparent Iowa caucuses you’ve ever seen.” I appreciate Kornacki’s positivity here.

However, Kornacki neglected to explain how state delegate equivalents are calculated—and I don’t really blame him because even with all the fancy touch screens and custom clip art in the world it would still be confusing.

Steps one and two and their corresponding data points are simple enough. Popular vote and then a realigned vote if those who support the candidates with little show realign themselves with a more viable candidate. Vox explains step three in striking detail:

To calculate SDEs, officials take the total county convention delegates and estimate how many state convention delegates that equals. Then they use the Iowa Democrats’ master delegate apportionment list to find SDEs. Sometimes this involves rounding, which has understandably confused the majority of the nation.

“It could all result in a muddled mess. If a candidate gets the most votes but not the most state delegate equivalents, he or she will surely try to claim victory, with good reason.”

So why has corporate media been using the confusing SDE counts? And why have some outlets gone so far as to declare Pete Buttigieg the winner based on what is clearly incomplete and even inaccurate data? I’m looking at you, Slate. 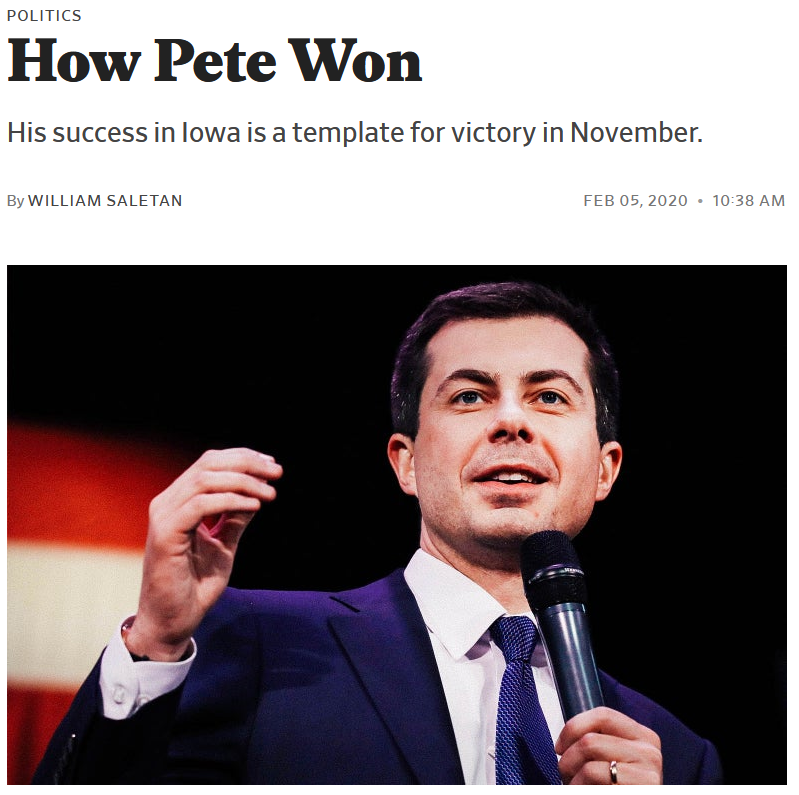 It’s really anyone’s guess, although a heck of a lot of people appear to have the same guess and it may or may not have something to do with Buttigieg’s uncomfortable connection to the app used to record all of this confusing data, the fact that he awkwardly claimed victory based on nothing, or even the hashtag #CIAPete.

Iowa, you have shocked the nation.

By all indications, we are going on to New Hampshire victorious. #IowaCaucuses

And now, moments ago, Sanders has claimed victory—albeit with more data on his side than when Buttigieg did on Monday.

We won in Iowa because of the unprecedented grassroots effort of our campaign.

Thousands of volunteers knocked on hundreds of thousands of doors in the cold and snow.

I want to thank each and every volunteer who participated in that effort.

But instead of siding with Sanders like they did with Buttigieg, corporate media appears to be taking a different route.

Whether or not someone in the Iowa caucus process was acting nefariously is up for debate but it certainly calls the process into question and where we go from here. Even the DNC itself who is rife with controversy and corruption of its own isn’t comfortable with the results.

Only hours ago, the leader of the Democratic National Committee Tom Perez called for an immediate recanvass of the caucuses on Twitter.

But at this point who can honestly trust anything that happened in Iowa on Monday? While completely unprecedented, the only way to have faith in Iowa’s results would be to have a do-over and do things a little more like the republicans. In case you were wondering, Iowa Republicans hold their caucuses much more like an ordinary, straightforward primary—one vote, no realignment, and no state delegate equivalents.

For a country bent on spreading democracy across the world and crying foul in foreign elections when our preferred candidates don’t come out on top, we should probably figure out how to count.

If we’ve learned anything from this week’s events it’s that the little trust left in U.S. elections has been lost, we can’t rely on corporate media, and the only useful next steps include either a complete overhaul of what is supposed to be a democratic election process or all out revolution.

But it seems the establishment’s next step is to just say they both won, make no admission of wrongdoing, and probably just pretend this never happened.