Here are five facts about the Total Lunar Eclipse taking place on Sunday September 27th/ Monday Sept 28th,  (Scroll down to #5 to learn about what this one means for your relationships!) 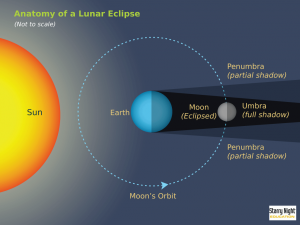 According to Earth-Sky.Org Sunday night’s/Monday morning’s lunar eclipse will be visible from most of North America and all of South America after sunset on Sunday the 27th. From eastern South America and Greenland, the greatest eclipse happens around midnight September 27-28. In Europe, Africa and the Middle East, the total eclipse takes place in the wee hours of the morning, after midnight and before sunrise September 28. A partial lunar eclipse can be seen after sunset September 27 from western Alaska, or before sunrise September 28 in far-western Asia.

The maximum part of the eclipse will be happening at 2:47AM UTC, which is 8:47PM on Sunday night for me in Denver. To find out exactly when to watch the eclipse in your city, visit this handy map from Time-and-Date. 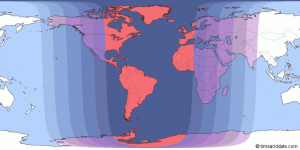 2. While The Term “Blood Moon” is New to Astronomy, Nearly All Total Lunar Eclipses Appear Some Shade of Red

The full moon almost always appears a coppery shade of red during a total lunar eclipse because of the sunlight that is filtered and refracted by the Earth’s atmosphere. (The only time it wouldn’t look red is when pronounced volcanic activity might make the moon’s face appear more brownish or gray in color.) 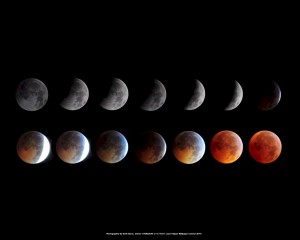 During a lunar eclipse, Earth’s shadow is visible creeping across the moon’s face, and this shadow will grow until it completely covers the moon. Then at totality, when the moon is fully covered by the Earth’s shadow, the blood red tinge will appear. This short NASA video does a phenomenal job describing why the moon turns red during an eclipse. 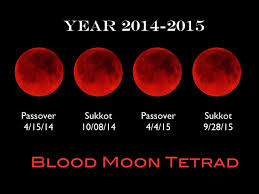 What makes Saturday’s blood moon so significant from a religious prophecy perspective is that the final one in a rare series of four full lunar eclipses each spaced out six months apart, known as a lunar tetrad…all falling on Jewish holidays! Some are predicting that this fourth blood moon symbolizes the Apocalypse – You can read more about those beliefs here.

Given that biblical prophecy is very far from my area of expertise, if you want to know more, Earth Sky does a good job with a shorter summery or go here for a more in-depth look at the biblical prophecy and decide for yourself.

During some lunar eclipses, totality (where the moon is completely covered by Earth’s shadow) can last up to an hour or more. While this past April’s lunar eclipse was the shortest of the entire century (with totality lasting only 4 minutes and 43 seconds!), totality for this weekend’s eclipse is going to last around 1 hour and 12 minutes, with the entire duration of the eclipse lasting over 5 hours. This gives you plenty of time to view the eclipse, and you will want to take this opportunity, because the next total lunar eclipse will not be until January 31st, 2018! 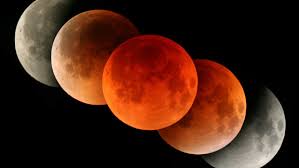 This eclipse also falls on a supermoon, meaning that the moon will be at its closest point all year in its elliptical orbit making it appear 14% larger in the night sky than a typical full moon.  The full moon in September is traditionally known as the Harvest Moon in the Northern Hemisphere, falling closest to the fall equinox. In the Southern Hemisphere, this is the first full moon of spring.

The next total lunar eclipse falling on a supermoon won’t happen again until 2033 so try not to miss this one! (I can’t help but wonder what life will be like 18 years from now when we look back on this weekend and reflect how much things have changed…)

All the talk of biblical prophecy aside, in many cultures the belief exists that full moons and lunar eclipses have some kind of impact of human feelings and behavior. For example, in ancient cultures, it was strongly believed that the lunar cycle impacted women’s hormones and fertility.

Given that full moons do impact the tides, and the human body is at least 70% water, maybe it makes sense that lunar eclipses could have some impact on women’s menstrual cycles or on the body’s circadian rhythm.

And yet, the scientific evidence has been relatively inconclusive. However, as I mention in this article, from a psychological perspective, the belief that an eclipse may impact your behavior might be enough for this to actually happen. Thanks to a social psychological phenomenon known as ‘Self Fulfilling Prophecy’, making a statement like “the lunar eclipse means I have the opportunity for new beginnings” can put you in a state of mind where you more open and more likely to allow those new beginnings into your life.

In the astrological world, lunar eclipses are usually associated with releasing what no longer serves you to create new beginnings and spur your personal growth. However, the exact changes that are stimulated will depend quite a lot on the astrological signs that the sun and the moon fall into during the eclipse.

This Eclipse and Your Relationships

Saturday’s full moon falls in the first degree of fire sign Aries, which is why this eclipse carries strong energies related to assertiveness, action and individualism. You might be feeling especially driven to express yourself, assert your feelings to someone, or take actions in a situation that involves someone else. The sun in Libra directs our attention towards establishing balance and fairness in our relationships with others, acting as a polarity to the independence of Aries. We are therefore being pushed to find balance between meeting the needs of ourselves and meeting the needs of others, driven to reconcile our self-autonomy with our dependence on others.

This eclipse marks the ending of the lunar tetrad cycle along the Libra-Aries axis that began in April of last year. Each of these eclipses has challenged us in different ways to assert our own personal needs, while also recognizing the importance of caring for others. Since this cycle began, many of us have experienced intense personal and relational challenges and growth. Many of my relationships are barely recognizable compared to where they were when this cycle began last year. It is time to reflect upon these changes, transformations, births and deaths, and integrate how they shape your path for the future. With endings, come new beginnings.

Some people have been calling this final eclipse in this cycle a sign of the “apocalypse” – which literally translated means: revelation. I’m no astrologer, but I believe that the final eclipse in this cycle has the potential to REVEAL to us all that we have learned about finding BALANCE between ourselves and other people, and how to weigh giving with receiving. Many of us have learned to set boundaries, to communicate our desires, to walk away from relationships that no longer serve us, and to experience new adventures with different people. As we work through the energies of this weekend, the time has come to communicate clearly and directly where we stand in our relationships, and to set intentions for how we would like things to evolve.

The energetic changes stirred up by this eclipse may feel especially powerful because the moon is at its closest point in its orbit to Earth- This means stronger tides, potentially disrupted sleep patterns, and rapid energetic shifts. You might be feeling especially anxious, stressed and impulsive, or you might be feeling exhausted, drained, tired and sore. Maybe you are bouncing back and forth between the two. Do something tonight that helps you feel grounded, like taking a salt bath, going for a walk, cuddling with animals, or bathing in the moonlight or dancing.

We have plenty of energy to work with when it comes to making relational changes we are seeking- My advice is to do your best to avoid being reactive to others, and to be patient with yourself as you work through these intense energies. Keep your goals for healing in mind. If you are upset, then this is the time to let someone know, but this is also the time to practice forgiveness and compassion as we recognize that everyone is fighting their own battle that we often know nothing about. Do not deny the intensity of your feelings, but also recognize that the way you choose to communicate can be as important as the message you are trying to put across. As my partner Jimi Ohm likes to say, “you catch more flies with honey than with vinager.” When in doubt, be willing to make compromises and take your time to make decisions based on facts, not solely on emotions. You will get through this… Just remember to breathe.

For more about the astrological significance of this lunar eclipse, visit this amazing write-up by Mystic Mama!

With blessings and love, Dr Kelly from The Lucid Planet