(TMU) — Stars are some of the most spectacular astral bodies that exist in the universe. Pure energy resides within them, and it is estimated that thousands of millions of them exist in the Milky Way alone. In the middle of our solar system is the Sun which happens to be one of the main reasons life is capable of residing on our planet.

Life and death are also an element in these portions of the universe, and we are about to witness the amazing astronomical death of Betelgeuse.

The death of a star can either be calm or extremely violent. A violent death releases colossal amounts of energy. The moribund star Betelgeuse is close to becoming a supernova. Betelgeuse is much younger than our Sun at just around 10 million years old, while the sun has existed for around 4.6 billion years.

Location of Betelgeuse in the constellation of Orion (NASA)

NASA describes the star as a “workaholic” due to its rapid evolution. It is placed inside the constellation Orion and its distance to Earth is around 640 light-years—relatively close considering the immense size of the universe. But Betelgeuse has run out of fuel and is getting colder while increasing its volume. Because of its already enormous initial mass Betelgeuse will have a violent death. It will explode. In astronomical terms this is called a supernova.

“This explosion might happen tonight . . . or within the few hundred thousand years…or it may have already happened, and we haven’t seen it yet!”

You’re probably wondering how it is possible for this to already have happened. Remember that when we talk about the cosmos time is relative.

If Betelgeuse were our Sun we would simply not be able to view it because its radius would engulf the Asteroid belt far beyond Mars and possibly Jupiter. In that sense, our location would be inside its corona. Similarly, if we imagined Betelgeuse were a volcano, what would it look like to us if we were inside of its magma? 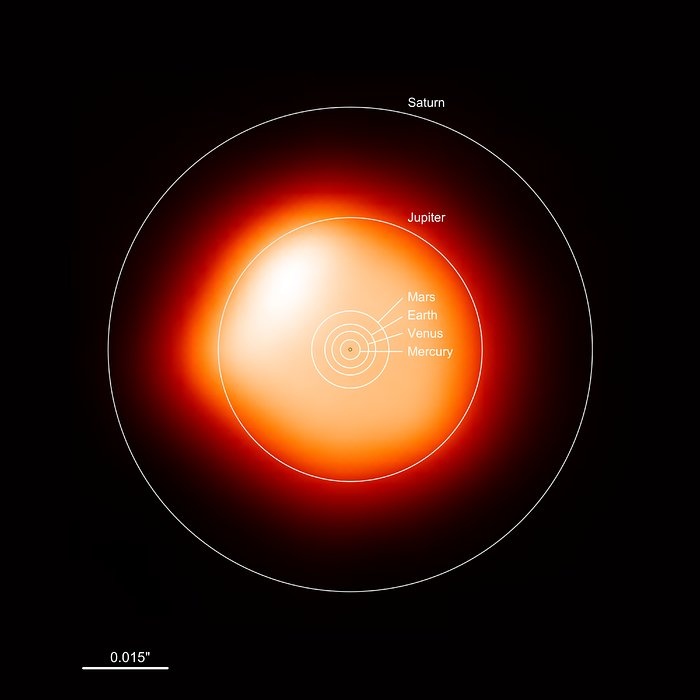 When Betelgeuse explodes the light produced may last minutes, hours, days, or even months. For inhabitants of the Earth the event will be extraordinary.

“The biggest question now is when it will explode in a supernova… Disclaimer: I don’t think it’s going to explode any time soon,” “But I am excited [for] when it does.”

a massive red supergiant in the constellation Orion, it's ~200 parsecs away & has fascinated humans for centuries with its signature bright red color and gargantuan size.

the biggest question now is when it will explode as a supernova.

So… how would this affect us? What will happen when Betelgeuse blows? As it turns out… nothing. Despite its closeness in astronomical terms Betelgeuse is nowhere near close enough for the explosion to affect life on Earth.

Astronomers calculate that it’ll take about 6 million years for the shock wave and any debris to reach the solar system, and even when that happens the Sun’s protective bubble will keep us safe from these potentially dangerous elements.

Toxic Chemicals Are Stealing Millions of IQ Points From Kids in the US, New Study Shows