There was a guy who came excruciatingly close to winning $2 billion on the Powerball, missing out by one number.

With the Powerball jackpot of $2.04 billion, some fortunate dude has just won the highest lottery prize in history. The winning numbers on the ticket were 10, 33, 41, 47, 56, and Powerball 10. The ticket was purchased in Altadena, California.

Apparently, the chances of selecting the winning numbers were one in 292.2 million, so the fact that someone has really won the huge reward is remarkable.

It’s already astonishing that some individuals got so near to getting the winning numbers themselves, yet still came up short when they might have won unfathomable sums of money.

And that’s exactly what happened to Nicholas Carrillo, who got all the numbers right except for 47, and wound up one number short of becoming the largest lottery winner in history after writing 49 instead. 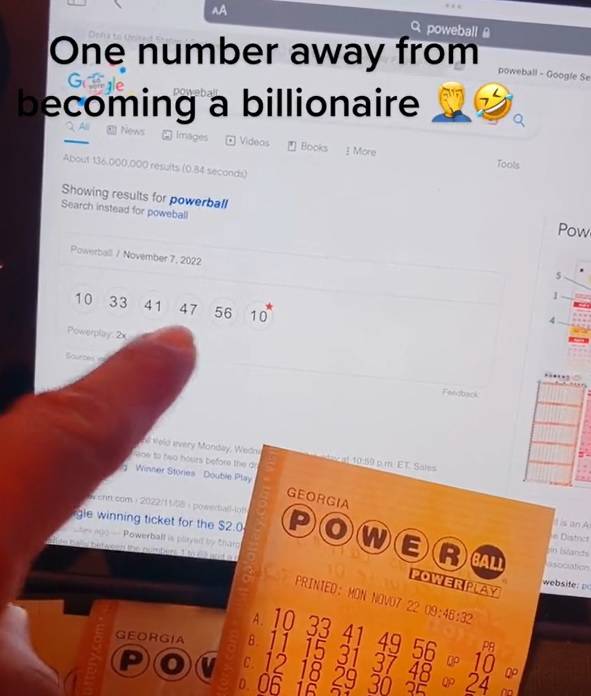 This man was one number away from winning the $2 billion jackpot. Photos courtesy of TikTok/@nicholascarrillo1

Nicholas posted a video on TikTok comparing his losing Powerball ticket to the winning numbers to demonstrate how close he had come. One number short of a billion dollars, the video ends with Nicholas giving himself the ultimate facepalm.

Others expressed their condolences, saying it must be “very heartbreaking” to be so near winning the largest prize in history yet still one number short of $2 billion.

After predicting four accurate numbers and the Powerball, you have to feel bad for the man, even if he won’t be leaving empty-handed.

He will still get about $50,000, but his consolation prize would have been $1,000,000 had he gotten the five normal numbers correctly and the Powerball incorrect.

Joe Chahayed, proprietor of Joe’s Service Center, was rewarded $1 million for selling the $2 billion ticket so it’s not only the lucky buyer who’s in line for a windfall.

He claimed he was “excited” about the chance of a local winning the huge prize and that he planned to share the money with his family, including his 11 grandkids.

The prize will be reduced from $2.04 billion to $997.6 million before taxes if the fortunate winner chooses to receive a lump sum payment.

The money must be paid out over 30 years at a rate of $68 million per year before taxes if they are to retain the whole sum.

Making even a little quantity of money is preferable than losing your ticket because your dog ate it or not informing your family that you won the lottery because you don’t want them to know.