Most people think of will power as how well they can control the actions of others. From an evolved, energetic perspective, true will power is developed when we can express our own creativity and life force – without the buy-in from our tribe. True will power allows us to buck the system, when needed, and go our own way.

While the early stages of our development involve how we can influence others, higher levels of evolution translate to control of our selves – first physically, then spiritually. This means we can maintain our own path no matter what our friends, family, and peers tell us we should do or what we should believe.

Most of us don’t even realize how influenced we are by our families, our friends, and even complete strangers. When you’re aware, for instance, that the people who you surround yourself with are constantly pulling on you energetically, it starts to make sense why we may become drained of will – to complete goals, to stay the course when things get challenging, and in some cases, even the will to get out of bed in the morning.

This does not absolve us from our full responsibility in maintaining those relationships, though. Only we can allow someone to be in our lives, or lovingly let them go if they are no longer serving us. We cannot give up our power – quite literally – by thinking that other people or situations have control over our choices. Though there will always be situations and people who we interact with that we simply cannot control or understand, we ALWAYS have a choice about how we respond to them.

Here’s a shocking example of our ability to change – to use our will, individually or collectively – to change course abruptly:

Communism Was Dissolved in 3 Short Days

An entire country had the “will” and “power” to change its consciousness literally overnight. This event was marked by the fall of the Berlin Wall on November 9, 1989. All of a sudden, citizens were free to cross the “border” between East Berlin, which was purely Communist, and West Berlin, which was not.

We can look at this from a purely historical or political perspective, but it benefits us more if we look at it from a spiritual and energetic perspective. Enough people finally had their fill of Communism, and so it ended. While this is a simplistic synopsis of events that occurred in the 1980s, it is still accurate.

How Do You Develop Will?

There’s a story of a Navajo-Caucasian man, David Paladin, who left his reservation when he was just a teenager. Through a convoluted set of events, he ended up being on a merchant marine ship, and dropped off behind enemy lines during WWII. Through an act of divine grace, he was saved from being sent to a concentration camp, where many people were meant for extermination. Though he was a US citizen, he was thought of as disposable, even though his government had used him to speak Navajo behind enemy lines and relay secret messages back to military commanders who wanted to avoid Nazi interception.

Though he wasn’t sent to the Nazi camp for immediate extermination, he was sent to a work camp where his feet were nailed to the floor, among other horrific tortures. Every day one of the Nazi soldiers would also force maggots into his mouth. He was barely alive, when he finally managed to get free and escape.

During his time in the internment camp, he also awoke once speaking Russian – and tells the story that the deceased, famous Russian artist, Vassily Kandinsky, entered his body to keep him alive. 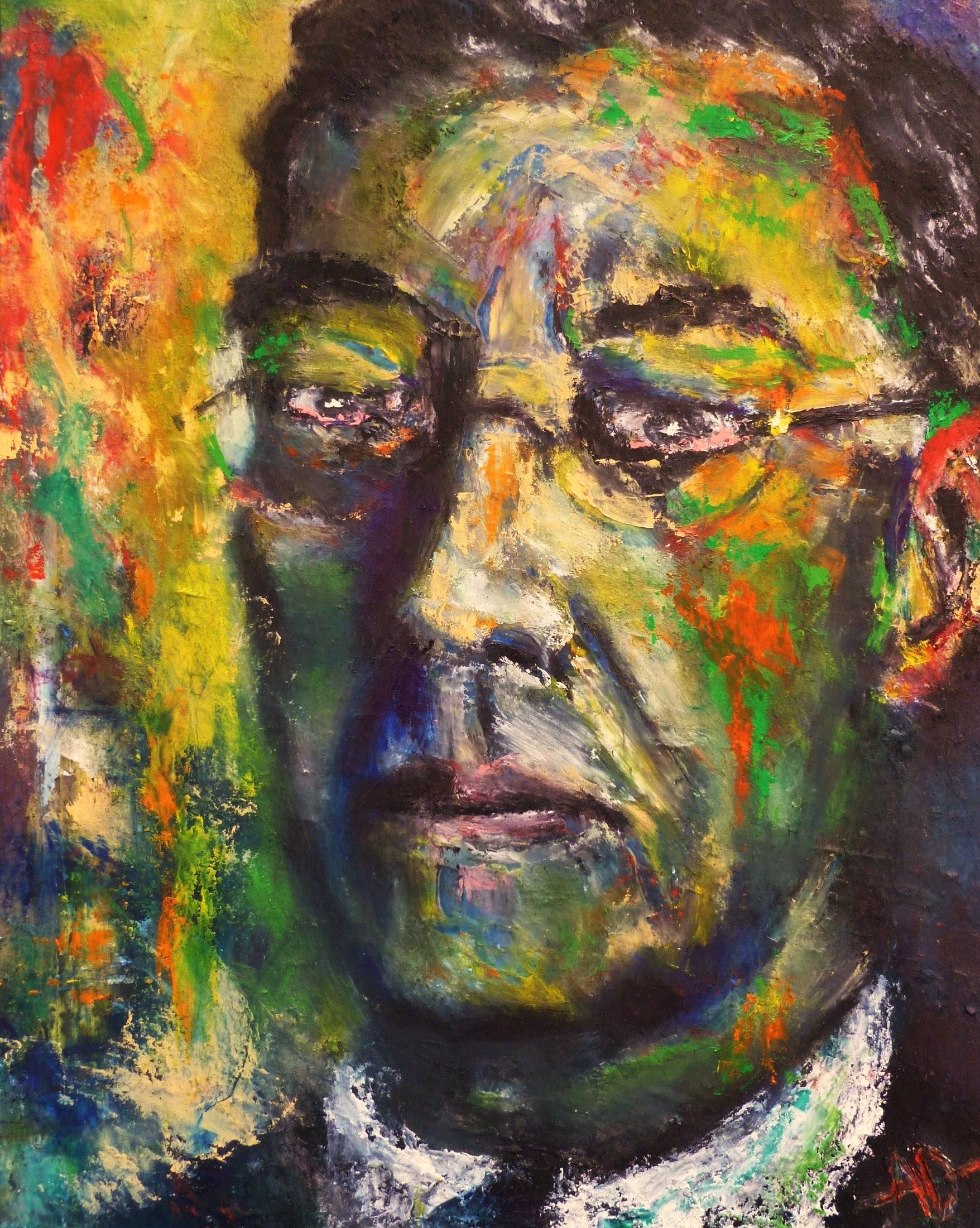 Self-portrait of the artist, Kandinsky.

Incidentally, Palladin was also an artist.

David Palladin posing in front of one of his paintings. Image: Source

David was later sent to a hospital where he stayed in a coma for two-and-a-half years. He awoke from the coma, and felt compelled to return home.

Though he was nearly crippled, David returned to his Navajo reservation to see his people to simply say goodbye, thinking he was close to death.

The elders of his tribe welcomed him, but then decided they needed to save him. Though he could barely walk, they tied a rope around his waste, and threw him into a river, and shouted, “Call your spirit back. You left it in Germany.”

David had to call every torture he endured to mind and forgive each person in his life for the torture and grief they had caused him. When he finally got to the man that fed him maggots every day, he said in his mind, “I forgive you,” and the truth of his experience came rushing into his consciousness. The man looked him in the eye (in his Mind’s eye) and said, “I was only trying to keep you alive. Maggots were all I could find.” In that instance, David got his will back. He forgave the perceived transgressions against him, and took his power from the person he gave it to.

As we look around our world today, there are multiple instances, whereupon we could instantaneously change course, using our Divine will. That will starts within you.

Ideas in the article are inspired by the intuitive healer, Caroline Myss’s book, Energy Anatomy